The tafsīr of the Moroccan Sufi Ahmad ibn ‘Ajība (b. 1747/8) is the most recent of the commentaries I am examing in this series, and because of that it is a good summation of the many centuries of exegetical tradition that preceded it, both in ‘mainstream’ Sunni tafsir and in Sufi mystical intepretation. At first glance, there is little to distinguish ibn ‘Ajība from his predecesors. He seems to be drawing heavily upon al-Baydawī (or al-Baydawī’s source, al-Zamakhsharī), with some expansions. However, there are some rather significant changes. For instance, we see that al-Sulamī’s story about Muhammad’s discontent has been included as part of the ‘exoteric’ commentary, and has been modified slightly. Ibn ‘Ajība includes brief grammatical explanations, taking care not to overburden the reader; he also includes an occasion of revelation story that we have not come across before, as well as brief speculation on the liturgical proscriptions inherent in this surah. He thus draws upon the wide variety of exegesis that had developed, paring it down and presenting the various elements in rapid succession.

Finally, of most significance is the final paragraph of the commentary, the ‘spiritual allusions.’ Here we see another form of Sufi exegesis, but in a very different order from al-Sulamī’s. Instead of the usual process of dividing the surah into lemmas (individual lines or units) and presenting various exegetical authorities and opinions, line by line, our author interprets the surah through a process of interpolation, flowing from phrase to phrase. He expands the verse using Sufi doctrines and concepts, uniting the scriptural words seamlessly with mystical language and experience.

The Truth [God], His strength is mighty, said: ‘Verily, we gave to you al-kawthar.’ That is: abundance of goodness, the one [Muhammad] whom universal prophethood exalts possesses the good of both worlds, universal headship, and the happiness of this world and the next. [The word al-kawthar is of the form] faw’al from [the word] al-kathira. And it is said: it is a river in the Garden, sweeter than honey, whiter than milk, colder than snow, softer than foam. Its two brims are of pearls and chrysolite, and its [drinking] vessels are of silver, the number of the stars of heaven, and the one who drinks of it will never be thirsty, and the one coming to drink it returns. Two of the Immigrants recited, [they are of] dirty clothes, unkempt hair, those who are not wedded to the graces [of God?], and He does not open to them the gates of intensity [?]- that is: the gates of the kings- due to their weakness. One of them dies, and his necessity stammers inside his chest- if he swore by God, let him fulfill it. [These last couple of sentences remain opaque to me. There seems to be some reference to something which I am missing…]

And ibn ‘Abbās interpreted it as abundance of good, and it was said to him: verily people say: it is a river in Paradise. So he said: The river is part of that good. And it is said: it is abudance of his children and descendents, or the ‘ulamā’ of his community, or the Qur’ān providing the good of this world and the next.

The [particle] fa’ in His saying ‘So pray (fa-sall) to your Lord and sacrifice’ is for the organization of what is after it in relation to what is before it, in that God, exalted is He, gave [Muhammad]- peace and prayer be upon him- what was mentioned of the gift which was not given to any one [else] in the world, deserving to the one commissioned by Him, that is, one deserving. That is: continue in prayer to your Lord- He who has poured out upon you this glorious grace, to which no [other] grace compares- purely devoted to His face, differing from the heedless hypocrites, so stand in the reality of gratitude for it, for verily the canonical prayer is a uniting of the various parts of gratitude. ‘And sacrifice’: the torso (al-badn), which is the choice part of the goods of the Bedouin, and give alms to the needy, differing from him who repells them [the needy] and forbids them, forbidding from them small kindnesses. And on the authority of ‘Attīa: it is the canonical prayer of dawn in a gathering, and the sacrifice is in Mina, and it is said: [it is] the prayer of the festival and of the sacrifical animal. It is said: it is the kind of prayer, and ‘the sacrifice’ is the placing of the right [hand] upon the left, under his sacrifice. It is said: it is that one raise his hands during the ‘God is great’, towards his sacrifice. And according to ibn ‘Abbās: face the qibla with your sacrifice, that is, during the ritual prayer. Al-Fara’ and al-Kalbī [also] say this.

‘Verily, he who hates you’: that is, the one who despises you, whoever he may be, ‘he is cut off’: he who has no descendent, when there does not subsist for him lineage, no glorification of remembrance- but as for you [Muhammad], your progeny remains, your fame is glorified, and your virtue praised, up to the day of the Resurrection. Because all who are begotten of the Muslims are your sons and your descendants, your remembrance is lifted up in the minbars, and is upon the tongue of every scholar and mystic, to the end of the age. One begins with the remembrance of God, and one gives praise through your remembrance. You possess in the next world what is not described in the Qur’an, and one cut off does not speak of even your likeness, rather, the one cut off, he who hates you, is forgotten in this world and the next.

It is said: [the verse] descended regarding al-‘As ibn Wā’al, who used to call the Prophet, peace and prayer be upon him, ‘cut off,’ after [Muhammad’s] son, ‘Abd Allāh, died. He stopped [to speak] with the Prophet, peace and prayer be upon him, and it was said to him: ‘With whom did you stop to speak?’ He said: ‘With that cut-off one.’ So Quraysh called him cut-off and one solitary without descendants. And when Ka’ab ibn al-Ashra- God curse him!- preceded to Mekka, and Quraysh agitated against [Muhammad], peace and prayer be upon him, saying to [Ka’ab]: ‘We are the people of al-Saqāya and al-Sadāna, and you are the master of the people of al-Medīna- so are we better, or is that cut-off solitary one without descendants of your people [better]?’ He answered: ‘You are better,’ so [the following verse] descended regarding Ka’ab: ‘Have you not looked to those to whom half of the Book was given, who believe in al-Jibat and al-Tāghūt…?’ (al-Nisa’, 51) And [the following verse] descended regarding them, ‘Verily, he who hates you, he is cut off.’

Spiritual allusions: it is said to the successor (khalīfa) of the Messenger, he who is molded after [Muhammad’s] innate characterstics and follows after him: ‘We gave you al-kawthar,’ abundance of good, because whoever obtains gnosis of God has gained the entire good. ‘He who has found You, what is he deprived of?’ [Ibn ‘Attā Allāh, Kitāb al-Hikam, Munājāt 26] ‘So pray to your Lord’ the prayer of the heart, ‘and sacrifice’ yourself and your passions. ‘Verily he who hates you’ and despises you, ‘he is cut off,’ and as for you, your remembrance continues, and your life is not cut off, because the death of the people of piety is life without annihilation afterwards. And Junayd said: ‘“He who hates you, he is cut off”: that is, cut off from attaining hope in You.’

May God pray for our master Muhammad and his house! 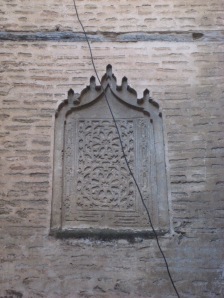