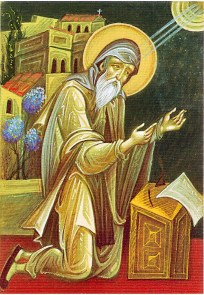 I have removed to a distance, Benevolent One, I dwelt in the desert
and I was hidden from You, the sweet Master.
I came under the night of life’s worry,
and there I sustained many stings and wounds,
having gone up I bear many blows in my soul,
and I cry out amid the suffering and trouble of my heart:
have mercy, have pity on me the transgressor!
O soul-loving doctor Who alone loves mercy,
Who heals the weak and wounded as a gift,
cure my bruises and wounds!
Drip the oil of Your grace, my God,
and anoint my injuries, wipe out my infections,
form scar tissues and bind up my severed
members, and remove all the scars, Savior,
and heal the whole of me completely as before
when I did not have defilement, when I did not have any bruise,
nor infected injury, nor stain, O my God,
but calm and joy, peace and meekness,
and holy humility, and patience,
the illumination of long-suffering and excellent works,
long-suffering and utterly unconquerable power.
Hence much comfort from tears each day,
hence the exultation of my heart
gushed forth like a spring, flowed everlastingly,
and was a stream dripping honey, and a drink of merriment,
continuously turning in the mouth of my mind.
Hence all health, hence purity,
hence cleansing of my passions and vain thoughts,
hence dispassion was with me like lightening,
and always associated with me. Understand me spiritually,
I who say these things, be not wretched, defiled!
The dispassion produced in me is the unutterable pleasure of communion,
and boundless desire for the wedding feast, for union full of God,
partaking of which I also became dispassionate,
I was burned up with pleasure, blazing with desire for it,
and I shared in the light, yes, I became light,
higher than all passion, outside all wickedness.
For passion does not touch the light of dispassion,
just as the shadow or darkness of night cannot touch the sun.
And so having become such, and being such a kind,
I was relaxed, Master, as I took confidence in myself.
I was dragged down by worry about perceptible matters,
I fell down, wretched, to the concern of life’s problems,
and I become cold like black iron,
and lying around for a long time I took on rust.
Because of this I shout to You asking to purified anew,
Benevolent One, and to be lifted up to the first
beauty, and to enjoy fully Your light
now and always unto all ages. Amen.

The translation below comes from a text I have previously written about here, the Futuvvatʹnāmah-ʼi Sultānī of Ḥusayn ibn ‘Alī Wāʻiẓ Kāshifī (c.1420-1504/5). For more information on the text and on the content of futuwwa/futuvva, see the above post. In this excerpt, Kāshifī deals with a topic that is not exclusively futuwwa or Sufi-oriented: the prayer-rug (sajjāda), a piece of liturgical equipment often emphasized by Sufis and Sufi-oriented futuwwa brotherhoods and guilds, but also by many other Muslims, both then and now. Kāshifī’s discussion of the prayer-rug is two-fold: one, he lays out the proper practice and behavior associated with the use of the prayer-rug; I have included a partial excerpt of these instructions. Second, he develops the prayer-rug as a mystical symbol, and spins practice-based implications out of those mystical symbols. The prayer-rug, already featuring a sort of cartography in its very design (see the illustration below and note 1), is given a further sacred cartography.

Kāshifī’s treatment of the prayer-rug, with his mix of practical regulation, mystical interpretation, and multiple layers of meaning (right down to mystical significances for the letters of words), is not unique to this one item. Rather, in previous chapters he explores the proper practice, mystical meanings, sacred origins, and scriptural justifications for all sorts of items: Sufi cloaks, futuwwa-belts, various types of clothing, headgear, and so on. As throughout the treatise, his language is generally quite accessible, with simple sentences and frequent translations of Qur’an and hadith texts (though not in this passage, curiously). Granted, as seen here, some of the language is deliberately esoteric, and might well have stumped some initiates (though perhaps also delighting them). The sources of mystical interpretations are diverse: here, for instance, religious legend, scripture, hadith, and Akbarian philosophic theology are all in evidence. The result is a text that contains an intersection of material culture, ‘popular’ religion, and ‘elite’ religious and mystical thought and practice: a text that we can reasonably imagine ‘ordinary’ Persian-speaking craftsmen and other workers, as well as more well-to-do people, reading and thinking about, perhaps in the course of their every-day prayers.

If one asks, What are the judgments regarding the prayer-rug and the mosque? Say to him: four: first, just as when one enters the mosque he puts enters with his right foot first, so, he puts his right foot on the prayer-rug first. Second, just as when one leaves the mosque he puts his left foot out first, so, when getting up from the prayer-rug one puts out his left foot first. Third, just as one does not speak of worldly things in the mosque, upon the prayer rug one also should not speak of worldly things save under necessity. Fourth, just as one should be continued occupied with remembrance [of God] in the mosque, so upon the prayer-rug one should be continually attached to remembrance, and speak words having to do with God and the Prophet.

If one asks, What are the pious customs regarding sitting upon the prayer-rug? Say to him: three: first, upon coming to the prayer-rug, one prays two raka’a, just as in performing prayer in the mosque. Second, sitting facing the qibla. Third, paying attention to proper practice.

If one asks, How many are the proper practices (ādāb) of prayer-rug sitting? Say to him: four: first, that one sit on two [bent] knees on the prayer-rug, though if necessary, the right leg can be brought up and the left leg stuck out. Second, that it not come to pass that his feet become barefooted. Third, that he not blow his nose or spit. Fourth, in like manner he should be prepared in regards to whatever comes into existence from him, be it in word or in deed.

Thus, the four corners of the prayer-rug symbolically point to the four archangels, the four sacred books, and the four blessed places. Thus whoever sits upon the prayer-rug it is incumbent that he be steadfast like a firmly rooted mountain, not attracting the wayward breeze of the soul, until the effluence of the divine Book and Word comes to him, and he find the rank of divine proximity. Also: the bearers of the divine throne are the four angels to which the four corners of the prayer-rug symbolically point, meaning that upon the possessor of the prayer-rug it is incumbent that the throne of his own heart, that is [as described in the following verse]: the heart of the believer is the throne of God and the heart of the believer is the house of God,[3] must be stretched out by possessing the four attributes [see below] until he finds a portion of the cry of the throne-bearer, as God says: Those who bear the throne and from around Him they worship with praise of their Lord, believing in Him and seeking forgiveness for those who believe (Q.30.7).

If one asks, What are the four attributes by which the heart can become a bearer of the Throne? Say to him: first, faith in the various parts of the shari’ah; second, belief in the mysteries of the Way; third, turning to the mystical traces of God; fourth, being illumined by the lights of divine knowledge.

If one asks, To what do the letters [in the word] prayer-rug (sajjādeh) symbolically point?[4] Say to him: the letter sīn is for the traveling and wayfaring of the possessor of the prayer-rug in the world of ruling (malakūt). The letter jīm is for his striving and struggle in the observation of the lights of divine power. The alif is for the instruction in the manifestations of the degrees of divinity. The letter dāl is for the remembrance (dhikr, sic.) of the [divine] presence living, not dying. The letter hā is for the destruction of the lower-self attributes and the satanic ones in the straitening of the temporal world.

[1] A prayer rug (sajjāda, P. sajjādeh) of this period (and previous and later ones as well) would have a stylized miḥrab (prayer niche) on it; the top of the miḥrab (which I have translated here as the miḥrab-corner) would face the qibla. See the illustration above.

[2] This is a curious bit of exegesis. In a brief survey of Arabic exegetical literature I made in preparing this post I found many opinions corroborating the identification of the protected land as that around Mecca (and perhaps also Medina), however, the rest of our author’s interpretation seems to be idiosyncratic to him. However, I did not survey any Persian exegetical literature (a somewhat more laborious task, as little of it is online, unlike Arabic tafsir), which would perhaps be the place to look. I suspect some legendary material lies behind these significations.

[3] A hadith, not a Qur’an citation; it is given, however, in Arabic, without an accompanying Persian translation as is often Kāshifī’s wont.

[4] Our author frequently finds mystical signification in the letters of words, often, as here, by linking each letter to relatively complex concepts of post-Akbarian Sufism. I am not sure if the practice should be interpreted as mnemonic device (I somewhat doubt it) or simply as another way of layering mystical and religious meaning upon material and ideational objects—even if the meanings are not necessarily comprehended by everyone in the targeted audience.