Pierced metal plaques such as the one above must surely count among the most spectacular instances of Safavid art to modern eyes, with their stark contrasts, incredible fineness of detail, bold clean lines surrounding delicate ornament, and obvious evidence of extremely skilled craft. Plaques such as this one- see below for another, quite similar example- once formed part of the interior of Safavid shrines, either to one of the Twelve Imāms or to the far more frequent imāmzādehs, the descendents  of the Imāms, who were also more likely to be found in Safavid controlled territory (there were also cases of saints’ shrines of various sorts being ‘converted’ to an imāmzādeh after the rise of the Safavids). Others were found on the tombs of Safavid shahs and in the massive shrine complex of Ṣafī al-Dīn, the Safavid eponym, in Ardabil. In 1550 large number of such plaques were ordered and installed by Shah Tahmāsp I in the shrine of Imām Riḍā in Mashhad, with further production through the rest of the Safavid dynasty.

So far as I know none remain in situ, a consequence of their likely original location- probably upon the grill-like structure surrounding the location of the tomb itself (see the 16th century illustration above for an idea of what such a space would have looked like). Such structures, as well as the built fabric of shrines in general, tend to be subject to great use, wear-and-tear, and continual renovation; as a result these plaques were dispersed and now reside in various museums and collections. Originally, however, they would have been visible to those making pious visitation (ziyāra) to the holy people whose tombs they adorned.

In terms of content, these plaques extoll and in some cases supplicate the prayers of the Twelve Imāms, as well as Muḥammad and Fāṭima, acting both to channel the intercessory power of these figures while linking the entombed person to the ‘People of the House.’ While devotion to the Twelve Imāms was not limited to Shi’i Muslims historically- contemporaneous Ottomans who would have regarded themselves as good Sunnis venerated the Twelve Imāms as well- such devotion was especially central to Shi’i Islam and to Safavid religious identity. These plaques signaled, to those who could read them (or have them read to them), that centrality, while also acting as inscribed requests for intercession, connecting the People of the House and their baraka to whatever shrine their names were place within. The sheer skill, time, and resources that were involved in producing such works were in themselves acts of devotion (along with the patronage of such work).

If the Safavid steel plaques were resolutely public, the above Qur’anic scroll probably was not, but would have instead been intended for individual consumption, if it was to be examined by human eyes at all. Completed in 1578/79, the scroll contains the entirety of the Qur’an, in itself both an act of devotion and a means of containing the prophylactic power of the text within an easily transportable medium, not dependent upon humans reading the text (which is incredibly tiny and intricate anyway as the below detail shows).

But it’s not just the Qur’an: the tiny script forms decorative patterns and calligraphic texts, a number of which are contained within ‘plaques’ which echo, no doubt deliberately, the pierced steel ones that were being produced and installed in shrines around the Safavid world at the time this scroll was made. The contents of the calligraphic plaques and other decorative calligraphic features are, unsurprisingly, almost the same: invocations of Muḥammad, Fāṭima, and the Twelve Imāms, their names and titles spanning the ‘architecture’ of the Qur’anic scroll much as they would have spanned literal built spaces at the time. The resonances must surely have been deliberate, not only linking the Qur’anic text to the People of the House via their names and honorifics but also through visual reference to the artistic forms then in use in their shrines, and hence to the shrines themselves and the holy people there entombed. And again, great skill was involved in executing these calligraphic ‘plaques,’ physically rigorous in a different way from cutting pressed steel but rigorous all the same and hence also an act of bodily devotion.

There is another point of commonality between these two sites of Safavid devotional art: both serve to entangle devotion to the Twelve Imāms (as well as Muḥammad and Fāṭima, we ought not forget) with other sources of holiness: the steel plaques would have been found within various shrines, some more directly connected to the Imāms than others, while the calligraphic ‘plaques’ are in fact literally made out of Qur’anic text (combined with neutral space) in addition to being a part of a Qur’an manuscript. Instead of one source of sacred power and meaning, both artistic forms were meant by their patrons and creators to channel and connect many such sources. Among other aspects, it is such attention to complex interconnectivity that marks these objects of devotion as distinctive to the Safavids, for whom devotion to the Imāms grew increasingly central over the course of the dynasty’s rule. Objects like these then can be seen as also being components in the transition of the Iranian lands from majority Sunni (whatever exactly that meant pre-Safavid) to the Shi’i majority we now often take for granted as always having been there, but which in fact required much social and cultural work, including these magnificent works of devotional art. 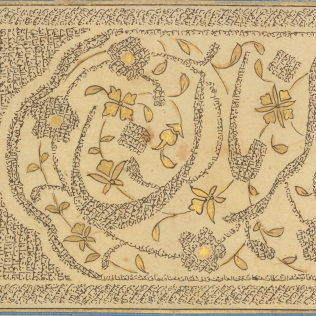 This work is licensed under a Creative Commons Attribution-NonCommercial 4.0 International License.

Support this blog, if you’d like. But mostly, just keep reading!