In yesterday’s post I introduced the theme of late medieval and early modern devotion to Muhammad, a ‘movement’ within Islam that became dominant and widespread by the end of the middle ages, especially flourishing in the early modern period. The texts of this devotion were not only written in Arabic: rather, devotion to Muhammad was often expressed in vernaculars. The following translated poem, by an Ottoman sufi şeyh and saint, Muhammed Nasûhî Üsküdarî (d. 1718), is a part of a larger collection of poetry of praise and supplication directed towards Muhammad, written in Ottoman Turkish. It is a good example of this genre of poetic composition, which was common across the Ottoman world and beyond, expressing theological concepts as well as emotional bonding between the poet and his object, Muhammad. I have included footnotes at points to clarify certain references that would have been relatively obvious to a contemporary reader or listener but might not be to my readers here. 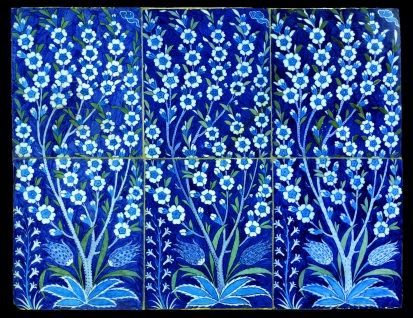 Who am I that I dare to praise you, o monarch of the heart?
You are the light of the moon of Yâ-sin [1] yâ Muhammed Mustafa!

You hold sway over the inner secret of this habitation below, o mirror of the True!
You are the monarch of the throne of If you had not been [2], yâ Muhammed Mustafa!

Without sign, without place, in your inner secret I beheld your essence.
You are the spirits of the passionate lovers, yâ Muhammed Mustafa!

[1] A reference to the 36th surāh of the Qur’an, Surāh Yā’-Sīn, sometimes referred to as ‘the heart of the Qur’an.’

[2] An allusion to a hadith qudsi– a hadith said to convey God’s speech, though not as part of the Qu’ran- in which God says to Muhammad words to the effect of ‘If you not been I would not have created the universe.’

[3] Including one’s name in the penultimate line is an Ottoman convention, carried over from Persian poetic convention.

As noted in a previous post, the Ottoman majdhūb/meczûb (the first is the Arabic rendering, the second the same term but in Ottoman Turkish)- the divinely drawn saint or holy madman- was often involved in the details of everyday life, such as the smoking of tobacco. In the following story, which comes from a compilation of meczûb lives in a sprawling 17th work of hagiography by Mehmed Nazmî Efendi, Hediyyetü’l-ihvân, we see one of these holy madmen miraculously discern the wandering thoughts of the imam in the greatest mosque of Ottoman Istanbul.

‘And there was one, Hızır Aşak, who was from among the great (ulular) of the meczûb. He was a powerful meczûp capable of unveiling inner secrets. It is related that the imam of the Süleymâniye Mosque, Süleymân Efendi—who was later dismissed and sent into retirement—was one day leading the noon prayers, when the thought came to him: “After completing the salât, I’ll go to Hisar [on the Bosporus] and go fishing.’ Just as this thought was occurring to him, Hızır Aşak came to the mosque, and, as was his custom, cried out “Hû!” [i.e. ‘He,’ meaning God, a common sufi form of zikr] and said, “Süleymân Çelebi! You are here, your mind ought not be off fishing in Hisar. There is no prayer without presence of heart. Lead these men in prayer a second time.” Having said this he left the mosque. Süleymân Çelebi related thus: “This unveiling of the mad one brought about divine fear and embarrassment before the people in me. For a little while I passed out! Coming to, I properly completed the prayers.”’

The following is an excerpt from the Qur’an commentary of the important eleventh-century Sufi writer al-Sulami, who wrote a prodigious number of texts, the most significant- in terms of later use and emulation- where the tafsir excerpted here and his Tabaqat al-Sufiyya, a collection of biographies of Sufis of preceding generations. Much of his work- such as the example here- involves compiling and reworking material from previous Sufis (and other sources); some of it, including- perhaps- the final paragraph here, are al-Sulami’s own compositions. At any rate, al-Sulami represents a consolidation of the early stages of Sufi thought and practice, as well as the reconciliation- or attempt at it- of conflicting or divergent strands of Sufi teachings and other forms of mystical practice.

I thought this selection gives a quite readable and approachable example of how eleventh-century Sufis are doing Qu’ran commentary; instead of the specialized grammatical and syntactical vocabulary of ‘conventional’ commentaries, Sufi technical terms are worked into the exegesis, at once reinforcing Sufi concepts and practices with Qur’anic dicta, while also ‘Sufi-ising’ the Qur’anic text itself. Another significant difference in all early Sufi tafsir, and even most later ones, is the selective nature of Sufi commentaries. Rather than go verse by verse, they select certain verses as locii for interpretations and explanations, usually- though not always- forgoing more conventional explanations for an interpretation that ties the text into Sufi understanding and practice. The following is an lovely example that also reveals the relative freedom and resulting artistry this particular exegetical technique can unlock.

To make the translation a little clearer for those not familiar with Sufi terminology, I have placed expansions of certain terms in brackets. Some words are simply impossible to really get across; a couple- including the bit about the wind blowing upon (or blowing into place?) a ‘mark’ on the heart- I don’t exactly understand myself. That’s part of the fun: and quite possibly the intended experience.

Ibn ‘Ata’ said: The good word is ‘No god but God’ in regards to the assertation, and the good tree is the triumphing of the secrets (asrār) of the professors of God’s oneness over the filth of desires, through faith in God, and through the cutting off for His sake of whatever is other than Him.

Muhammad bin ‘Alī said: the good tree is faith, God establishing it in the hearts of those He loves, and He makes its earth congruity [with His commands], its leaves sainthood/governance, its sky assistance, its water soliciting guidance, and its branches sufficiency. Its leaves are sainthood, its fruit union [with God], its shade intimacy. Its branches (aghsānuhā) are rooted firmly in the heart/core of the friend/saint, and its twigs (farū’uhā) are firmly rooted in the sky, through the superabundance of the presence of the Omnipotent. The root tends to the branch through continuious compassion and watchfulness, and the branch guides the root through what is gathered from the state of witnessing and proximity [to God]; thus, the heart of the believer and his benefits is disclosed.

I heard Muhammad bin ‘Abd Allah al-Damashqī saying: I heard ibn al-Mawlad saying: Abū Sa’īd al-Khrāz said: the treasures of God in the sky are the unseen (al-ghayūb), and His treasures upon the earth are hearts. For God the Exalted created the heart of the believer as a house of His treasures, then sent a wind which blew upon it a spot of unbelief, associationism (shirk), hypocrisy, and deceit. Then He created praise, and it rained down in [the heart], then He firmly roots in it a tree. Then it bore fruit of good pleasure [with God], love, gratitude, purity, sincerity, obedience- so His saying ‘Like a good tree its root is firmly established and its brances are in the sky.’

There was an error retrieving images from Instagram. An attempt will be remade in a few minutes.