These sunflowers, and various other plants, seem to have volunteered themselves in a disturbed empty lot along Manchester Avenue in the far western corner of the city of St. Louis, a little before Maplewood. Manchester runs through the valley of the River des Peres, which, despite the grandiose name, is these days a large concrete ditch with trickling polluted water. The valley, besides being home to Manchester Avenue, is a patchwork of abandoned green spaces, industrial plant, railroad yards, and, in the area proximate these sunflowers, struggling strip malls. A nearly defunct K-Mart is down the parking lot, along with long lonely stretches of blank facades. I don’t know what used to be in the lot these plants are flourishing in (well, blooming prolifically, at least- they are rather short, perhaps a result of soil deficiencies). There are concrete bits and blocks; the ground has been moved about relatively recently. Perhaps those disturbances awoke or encouraged the plants that have sprung up here this year; perhaps someone seeded the sunflowers as an act of random beautification. My guess would be the former; the other plants are usually classified as ‘weeds’ and do quite well for themselves, with or without human intervention. At any rate, this little patch of green and yellow is, it goes without say I think, a marker of the resiliency of the natural world, and the continual possibilities and life that so often lies just under the surface, waiting. 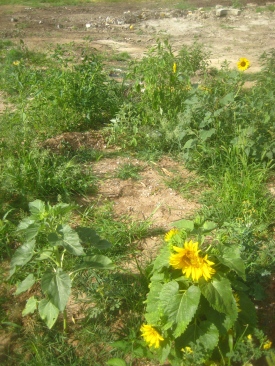 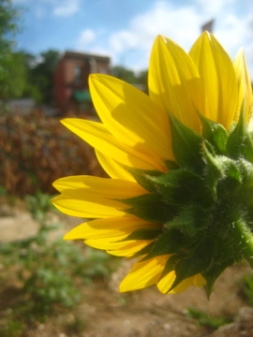 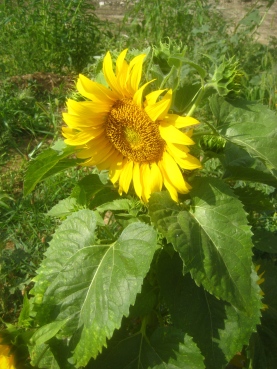 Another from summer vacation back in June: examining the interior of one of the dismounted guns at Fort Sumter in Charleston's harbor. #cormacchannellallen #verawynneallen #fortsumter
Navigating a massive split in a sandstone boulder up at Rocktown on Pigeon Mountain one muggy day back in July. #verawynneallen #rocktown #pigeonmountain #sandstone
Little girl, big leaf! #verawynneallen #magnoliamacrophylla #fosterfalls
Our hike down to Foster Falls in South Cumberland State Park was really lovely, until Cormac got stung by a yellow jacket, his first encounter with a severely stinging creature; he was ok after a while (this photo was post-sting), but for an interval there we were definitely not having fun... #cormacchannellallen #verawynneallen #fosterfalls #southcumberlandstatepark #littlehikers
Another from early in the summer: later Cretaceous sea urchin fossils and a fossil Exogyra mixed with contemporary shells in the surf line at Holden Beach, North Carolina, probably my most exciting excursion into the Cretaceous this year- besides the gorgeous sea urchins I found some fine mosasaur material, plus some decent late Pleistocene stuff mixed in with the Recent and Cretaceous, a real paleontological smorgasbord! #cretaceous #holdenbeach #fossils #seaurchins #exogyra
One from way back at the start of the summer: climbing on the Eocene-age sandstones in Peachtree Rock Heritage Preserve outside of Lexington, South Carolina. #cormacchannellallen #verawynneallen #peachtreerock #littleclimbers