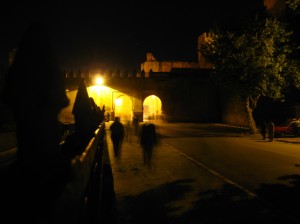 The road here passes alongside the big green liminal space that lies between Fes al-Bali- the oldest part of the Old Medina- and Fes al-Jedid, the rather newer (fourteenth century) construction that once housed the Sultan and Fes’ Jewish community. Today the King still has a residence but all that remains of the Jewish community are a couple synagogues and the white-washed cemetery.

The region between the two halves of the city is mostly covered in green space, with the old water channels- the restructured pieces of the streams that made Fes a desirable city in the beginning. Now they are home to at least a few frogs, who start to show up as spring evenings warm and lean towards summer. I passed through one evening as the crowds along the avenue were thinning out and the frogs starting up, down in the warm, mucky green water of the canals, fresh and vigorous against the late medieval bulwarks behind. I thought- here, at the edge of the desert (the dust was already starting to intrude, coming in through the open window of my bedroom, and the shopkeepers beginning their war upon dust in the streets), under the weight of the centuries of the city, are frogs, singing, as they have no doubt been singing under these walls for centuries, as the mulberries come into leaf. Kids run by, one chasing a ball (maybe they are the same kids I would see climbing the mulberries gathering fruit and leaves?); a single car mumbles by, the crowd moves along, laughing, calling, the snatches of Maghrebi Arabic ring in my ears. Frogs, children, the vigorous clip-clip of Maghrebi, spring over all- life, wonder, the ancient, the eternal, what I know, and what I can only listen to, and feel.

A few weeks ago the weather briefly- it’s now turned back cold- warmed, the sun came out, and the weeks of bitter cold passed into memory. It was warm enough that, for a few days at least, the frogs came out along the banks of the French Broad River at the Seven Islands Refuge, a Knox County park east of town. I was coming down the big limestone ridge towards the river when I heard the frogs singing, filling up the still wintry looking woods and fields. I scrambled down to the edge of the little flood-water pond, its quiet waters having swallowed up part of the trail and the clumps of weeds and brush. This also is a sort of liminal space, stuck between the wooded ridge behind and the river banks beyond, the pond precarious and temporary, the frogs unexpected- frogs in February? Where did they come from- I suppose frogs hide in the mud during the cold- what woke them?

The frogs seemed to be spread out in a line up and down the little pond, rising and falling in their song. I squatted beside the water and listened, closed my eyes, breathed the spring, the return to life, the womb of water and the song, all things bright and beautiful and alive. 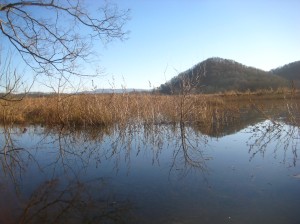 3 thoughts on “Comparative Spaces, Sounds: Frogs, at Fes and at Seven Islands”

We've been very, very busy these last several weeks, including excursions to nearby natural wonders, such as this lovely waterfall deep in Cloudland Canyon, which Cormac and Vera hiked down to and back up last week under their own power- and there are a lot of stairs involved! #cormacchannellallen #verawynneallen #cloudlandcanyon #cherokeefalls #georgianature
Upper Piney Falls, one of my favorite waterfalls since childhood, it was a real treat to get to share it with my kids- just as gorgeous and magical as I remembered it from many years ago! #pineyfallsstatenaturalarea #waterfalls #upperpineyfalls #tennesseenature
Starting out on new adventures the last few days, including a hike- probably the most strenuous the kids have done under their own power (well, mostly- Vera required carrying the last quarter mile or so...)- to Piney Falls, outside of Spring City, Tennessee; pictured here one of the rockhouses on the trail down. #pineyfallsstatenaturalarea #rockhouse #cormacchannellallen #verawynneallen
Examining what must surely be one of the best hollow trees this side of North America, a massive tulip poplar on the banks of Gunpowder Falls, its hollow large enough to accommodate two or three adults and/or several children, as pictured here! #hollowtree #gunpowderfallsstatepark #friends #tulippoplar
Cormac and Vera expertly climbing some very, very old rocks alongside Gunpowder Falls at Pot Rocks just north of Baltimore. #cormacchannellallen #verawynneallen #gunpowderfallsstatepark #geology #rivers
View of the bright colored cliffs of the late Miocene St. Mary's Formation along the Chesapeake Bay, from a fossil hunt last month on a very, very cold day. #stmarysformation #miocene #driftwoodbeach #geology #marylandnature