The following are a few shots I took while biking around Knoxville a couple afternoons ago, most of them within a mile or two of my house. Back in the late forties an American travel writer dubbed our fair city the ugliest in America, which words spurred the city notables to action. In time the beautification, if that’s what we want to call it, of Knoxville would include the Sunsphere (see below)- a structure that is- well, let’s just say it’s charming in a kitschy-I-see-it-everyday-so-I-have-to-like-it way. Maybe. At any rate, the scruffy little city- another epithet it was given in the later half of the twentieth century (in the first half it was known as the Underwear Capital of the World, for what that’s worth)- is actually a quite pretty little city, if you know where to look.

Maybe even including the Sunsphere.

I had driven by the old- built in 1905- Louisville and Nashville depot nearly every day since moving to Knoxville and had been telling myself almost every time that I needed to stop and have a look. I finally got around to it- the delay mainly caused by the awkward location the depot is now in, with the construction of a major intersection hard against it; it’s no longer in the route of too many people on foot or bike, so it has to be searched out. But it’s an absolutely beautiful building that deserves greater use than it’s currently getting (the city’s main public library may be moving there, I’ve heard).

Overpass in the Old City; while the ridiculous tangle of over-sized highways slicing through downtown is agravating, I still find the interplay of the stark lines and colours of overpasses with the sky. 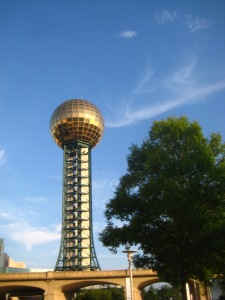 The infamous Sunsphere. As mentioned above, our giant disco ball on a stick does start to grow on you after a while. 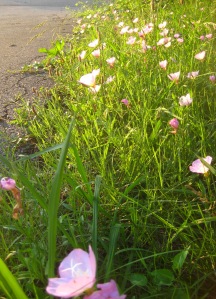 Flowers at the roadside: left, primroses in the Island Home neighborhood;  right, wild parsnip (?) in the Old City.

Wonderful house and garden over here near Morningside. The glass-block mail box is just brilliant.

Below: sort of posing cat atop a car in Island Home, and the Gay Street Bridge, looking back at downtown.

Finally, a piece of roadside art/graffiti I seredipitiously chanced upon in Island Home. I’ve had a project of sorts in my head for a few months now: to document all the religiously-themed graffiti I come across, and if I can- though this is much less likely- find people who have actually inscribed religious graffiti. The stuff is pretty ubiquitious down here- and elsewhere, and has been for a long time, whether in the simple ‘Jesus Saves’ stencils that dot the interstate from here to New Orleans or in the prayers of pilgrims in medieval shrines East and West. Anyway, this particular instance is interesting not just for the seeming contradiction of religious graffiti- it’s still technically vandalism and all that- but also the fusion of religious imagery, in this case Scripture reference (and maybe the cryptic, to me anyway, words ‘1st Nature’), with nationalist American imagery. It’s also a pretty impressive piece of street art- even though it’s pretty well hidden down a retaining wall.

Doing some cooking- pear pie- last weekend at the lovely Benjamin Banneker Historical Park outside of Ellicott City. #cormacchannellallen #verawynneallen #cooking #outdoorkitchen #benjaminbannekerpark
Vera found lots of mushrooms on our hike today, including lots of shelf fungi in a logjam by the creek- she loves mushrooms, gets quite excited about them, and why not, they're so cool! #verawynneallen #mushrooms #northwestbranch #marylandnature
Rock climbing down by Northwest Branch this morning- we saw some people bouldering so Cormac and Vera were inspired to try it out for themselves! #cormacchannellallen #northwestbranch #climbing #rocks
We made it out to the 160th anniversary events for the First Battle of Manassas/Bull Run and got to see an artillery demonstration, fife and drum playing, and soldier encampments, including these colors, very, very hot (just like apparently the day of the battle). #cormacchannellallen #manassasnationalbattlefieldpark #firstbattleofbullrun #reenactment #americancivilwar
We were excited to find a new species of (annual) cicada yesterday in the karst landscape above Strasburg: Neotibicen robinsonianus, recently emerged, several more singing in the pine and cedar trees atop Hupps Hill. #cicadas #huppshill #karstland #insects
Resting after our climb up and down Woodstock Tower in George Washington National Forest on Saturday- Cormac and Vera's first proper fire tower, they were very brave, I was terrified, it was a quick visit to the top, wonderful view though. #woodstocktower #cormacchannellallen #verawynneallen #georgewashingtonnationalforest #virginia #firetower